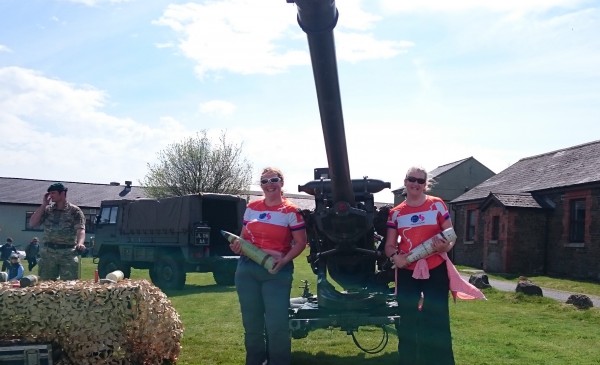 Not many people taking youngsters out on trips have to utter the words, ‘Don’t touch the ordnance.’ But up on Dartmoor, the army run live firing exercises and there are sometimes exciting looking bits of left-over ordnance (shooty-stuff) lying around. Boys, as you can imagine, love it!

I think girls must quite like it too because at Ten Tors camp, Blonde One and I decided that we would like to have our pictures taken, in our Ordnance Survey Champions shirts with the rather big ordnance pictured above. We asked the nice army chaps and they suggested that we might also like to pose with some shells (they neglected to mention at the time how heavy said shells were!)

I am very pleased with the resulting picture, I think we Blondes look kind of tough and definitely champion-like. Nobody would argue with our contour lines! Please don’t tell anyone that we were both struggling to hold the weight by the time three separate cameras had taken their pictures.